This box contains the love of my life, an Agfa Rondinax. The Agfa Rondinax is an extraordinary gadget that allows me to develop film anywhere and anytime. I could for instance, develop my films as I smoke a pipe, while on a family camping holiday like the man below. Now I have a Agfa Rondinax, the world is my oyster.

I bought mine off Ebay, it arrived today, in new condition, I'll be developing a film later.
But I'm getting ahead of myself here and I should explain how this device will make my life easier. Film needs to be developed in total darkness and this is done in a tank. But first you have to load the tank with your film, in the dark. Since I was 14 years old I've used a standard developing tank to develop my films. This is a light proof cylinder containing a spiral. You go somewhere dark, remove the lid of the tank and take out the spiral. Then you remove the film from its cassette, or spool, trim the end with scissors and thread the film (which feels like it's several miles long in the dark), onto the spiral. Finally, screw the lid on tight before turning the light on. The rest of the process you do in the light. 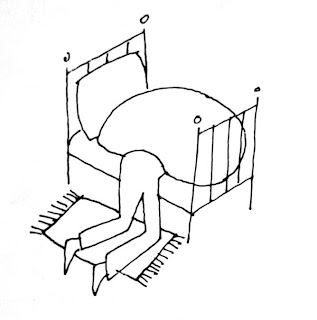 The ritual of loading film in the dark, is comical and uncomfortable. My own technique involves doing it under the bed covers while kneeling next to the bed. You want to to be under and out as quickly as possible, it gets hot down there. Usually everything goes smoothly, but sometimes there's a hiccup. A common problem is when the spiral is damp from a perevious session or, having damp, sweaty hands. The slightest damp and the film sticks and won't load smoothly. On a hot day hiccups can keep me in the kneeling position for longer than I'd like.

Here's where the Agfa Rondinax comes into its own. I can now do the loading in the glorious light! No more kneeling. I put the film in the machine, wind a knob and it loads the film onto a spiral, automatically. It even has a thermometer built in so I can keep an eye on the temperature of the chemicals, bliss.  This machine is not new, it's been around for over fifty years, so you may be wondering (like I am), why it's taken me all these years to get one. The answer is money, for many years I couldn't afford one. But now I can, and I'm very happy.
Posted by stylemed at 10:14 AM