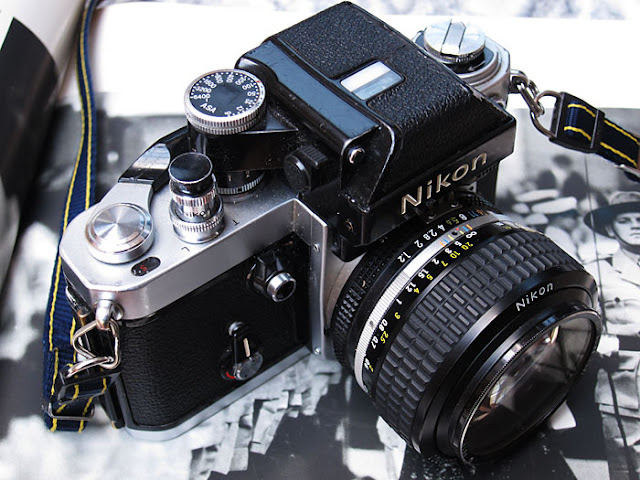 My Nikon F2
Imagine you only have one camera and you had to use it for the rest of your life. What camera would you choose?

Until quite recently that's how you had to chose your camera, unless you were wealthy enough to indulge yourself. Not long ago, just before digital cameras took off, camera manufacturers had production runs that lasted several years. In relative terms cameras were a lot more expensive than today, and you bought your camera knowing it would be a long term investment.

My first big investment in a camera was a Bronica that I used for social photography, weddings and portraits. My second big investment was a used Nikon F2. Both purchases required me to attend an interview at Lloyds bank, where I was lectured in the importance of regular repayments of the loan before putting my signature across a penny stamp with the Queen's head on it. 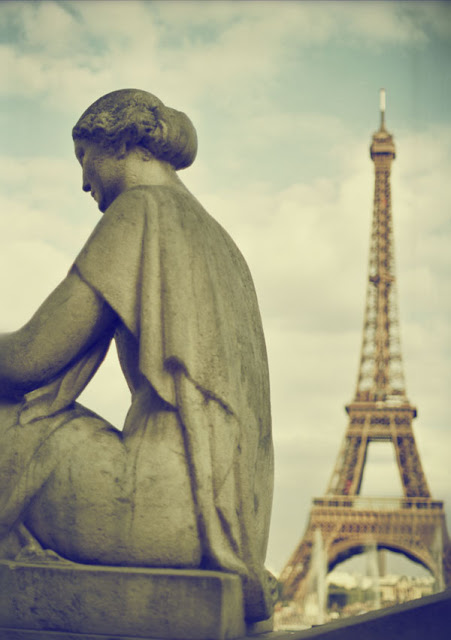 Paris with a Nikon F2 using outdated (1998),  film - Photograph by Tim Irving
That was over 25 years ago, the Bronica was sold when I couldn't stomach another wedding, but the Nikon and I are still together, in fact I used it in Paris last week. And after 25 years and countless other cameras passing through my hands, I see no reason to abandon my Nikon.

The Nikon F2 is without doubt a design classic! It's evolutionary path can be traced back to 1957 and Nikon's SP rangefinder camera, which then evolved into the Nikon F in 1959, before finally evolving into the F2 - which was launched in 1971.

The Nikon F and F2 cameras became popular at a time of historic social change throughout the world. It was the chosen camera of photographers covering the Vietnam war and in particular Don McCullin. You can see Nikon F's being used at Woodstock. Dennis Hopper photographed the civil rights marches with one. Paul Simon put one in the lyrics of a song, and the icing on the cake, a Nikon F co-starred in the movie "Blow up" -the film that inspired Mike Myers to create Austin Powers! For a young man in the 60's and 70's owning an F or F2 was like owning a Fender Stratocaster, it made you attractive to women, a leader of men and it cured acne. I had to have one. 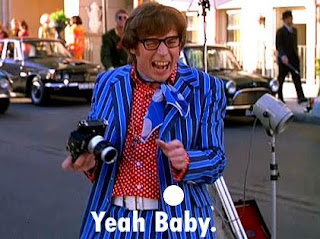 Austin Powers with his Nikon F2
The F2 is a totally mechanical camera. The meter requires a battery, but the camera itself will take photographs requiring only the power of your thumb to wind on the film. I don't know how many thousand films I've used over the years. In all conditions from dusty and hot to wet and cold, all over the world, the F2 has never missed a beat and it's never had a service apart from changing the foam light seals every 10 years, which takes 10 minutes to do youself.

As  a professional system camera, Nikon over-engineered the F2 and built it for life. As a system camera it can be modified to perform anything asked of it. The system comprises thousands of accessories and lenses. It was used by architecs, archiologists and astronauts (I could go on), in locations from the ocean floor to outer space. There's even an accessory called an endoscope that lets you take photographs inside the human body. Can you imagine your doctor asking "please touch your toes and relax, I'm just going to insert this Nikon F2 up your anus".

From an aesthetic point, the Nikon F2 is a fine looking camera, it's design was the product of gradual improvements over its 9 year lifespan and the end result is a handsome, workmanlike machine. It looks serious and has always received respectful glances, today it's considered cool and very trendy. It's the perfect accessory for the game of One-upmanship.

The camera that followed the F2 (the F3), was designed by Giorgetto Giugiaro, the designer of De Lorean and Alfa Romeo cars. The F3 was a total re-design and Giugiaro added, for no good reason, a red stripe that runs down the handgrip. I'm not a design snob, but if I owned a Nikon F3 I'd have to cover up the red line.

I don't think you could improve the F2 without compromising some of its many qualities. A titanium lightweight version would be nice. My camera with a standard lens weighs 2lb 13oz and after a long day swinging from my neck I do sag, I wish it were lighter, but the Nikon F2 is what it is, I live with the weight. Austin Powers would argue that the weight of the camera makes it a good weapon, and he'd be right.

David Hemmings in Blow-up
Posted by stylemed at 4:39 AM