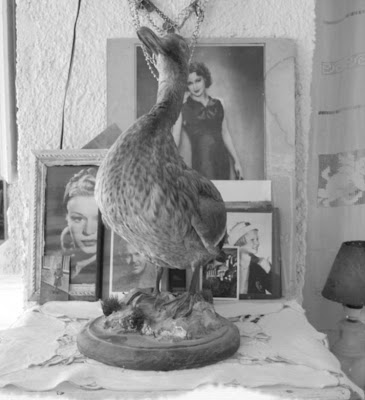 Duck with portraits, taken with a Kodak box camera
People who buy vintage cameras tend to fall into three types: collectors, interior decorators/designers and photographers. One camera that suits all types is the humble box camera.

I'm a devotee of the box camera, I once used one exclusively for seveal weeks, photographing village life in Spain. I'm always amazed when I see the results produced by a simple camera getting on for 100 years old. The reason for the exceptional photographs is that the negative size of most box cameras is 6x9 cm, that is huge! 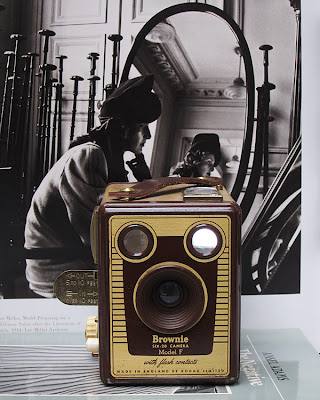 Gold and Ivory Brownie Model F
Most manufacturers made a box camera for the consumer end of the market, there's a bewildering choice, but I've narrowed my choice down to two makers, Kodak and Zeiss. The gold Kodak Brownie above is very attractive but isn't my first choice to use, that honour falls to the Portrait Brownie, Number 2. 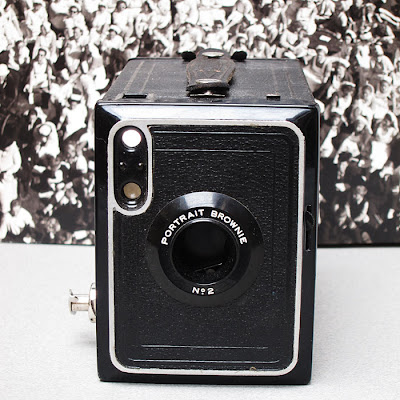 An important feature of the Portrait Brownie is the number "2" around the lens. All number 2 box cameras use 120 film, which is readily available. Most Kodak box cameras (like the gold one above), use 620 film, which is not available anymore, but as it's only the spool size that's different, it's an easy job to load the original 620 spool with 120 film.

The No.2 Portrait gets the designation "Portrait" because it has a close up lens built in, operated by a little lever on the front. Originally intended for head and shoulder portraits, it makes this little camera very versatile (for a box camera). The Kodak Number 2 Brownie also has 3 apertures and a time setting to leave the shutter open. I've always wondered why Kodak didn't mark any of the controls on this camera! Did they think it would spoil the lines? Whatever the reason, you have to spend some time memorising what each control does. 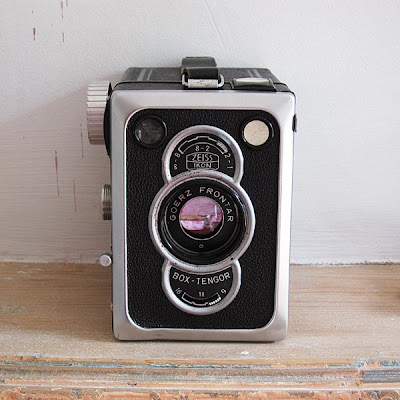 There are no tests of memory requird for my other box camera, it's the Zeiss Box Tengor above.
Zeiss made box cameras from the 1920's, mine was made between 1948 and 1956. This was the last box camera made by Zeiss, the end of an era. As you can see all the controls are clearly marked, there's no guessing on this camera.

As for the quality and characteristics of the negatives produced by these camera, each has it's own merits - that's why I use them both, they're brilliant.
Posted by stylemed at 2:24 AM