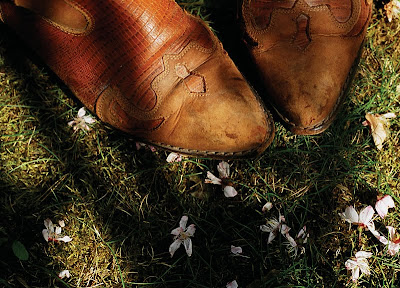 Old boots, taken with a Kodak Retina II
You might have noticed that I take a lot of photographs of vintage cars. It's not that I have an interest in automobiles, I use car shows as an opportunity to test cameras and film. These events are also interesting from a 'people watching' perspective - of which I do have an interest.

At the shows I overhear conversations about various aspects of ownership, I heard one owner telling someone that he spent 10 months cleaning, preparing and painting (6 coats), the underside of his Ford car. I had to look, I got down down on my knees and it was indeed very, very shiny.

I've noticed that vintage car owners admire complication, lots of knobs, dials and switches. The best of these fiddly little things are chrome and are pulled, pushed, turned and flicked while driving, or for that matter while the car is stationary. I suppose the ultimate fantasy car would have a chrome Hammond B-3 organ built into the dashboard.

The owners of the cars are happy to have their pride and joys photographed, it's a common occurence. They rarely comment when I'm taking a picture except to point out the car's unique characteristic which is usually something mundane like an extra wheel nut. But if I'm using a folding camera it can start a conversation, and if the folder is a Kodak Retina you can almost see lust in their eyes (at the camera, not me). 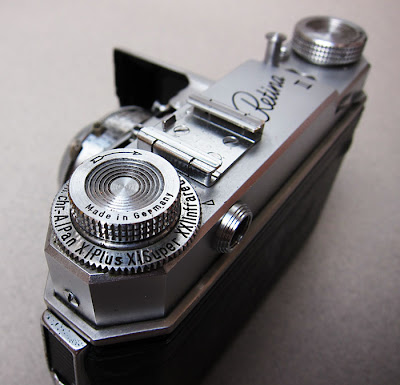 The reason for the lust is easy to see, the Kodak Retina has all the qualities of a classic car: leather, chrome, machined parts, grease and glass, and most important, plenty of knobs and dials. Added to this is the fact that Kodak Retinas are more complicated than a Webber DCO45 Mk 3 and you have all the ingredients for a love affair between man and machine. 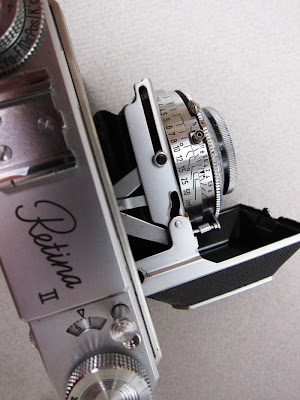 The folding Kodak Retinas were born when Kodak bought the German Nagel company in 1931. For 30 years, until the early 1960's, Kodak Retina cameras were the company's luxury product, elegantly designed and precision made, they ooze quality. Engineering and finishing is second to none, the wonderful optics from Schnieder, the Compur Rapid shutter that has a musical quality at slow speeds - and it's ultimate trick, to fold up into an oak tanned, saddle leather carrying case that fits in your pocket. 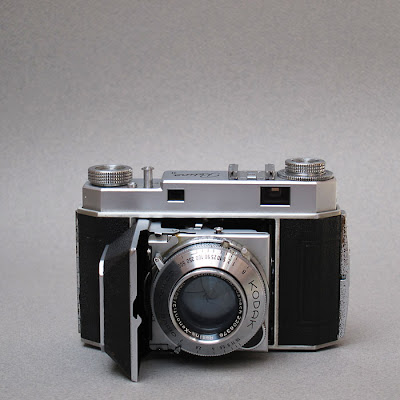 The description above was inspired by my conversations with vintage car owners, but the folding Retinas are wonderfully tactile little cameras that have produced many saleable photographs for me over the years, I still use them especially when travelling.

These cameras do look a little intimidating, but 15 minutes turning, pulling and pressing and you soon get the hang of them, and they are definitely worth the effort. 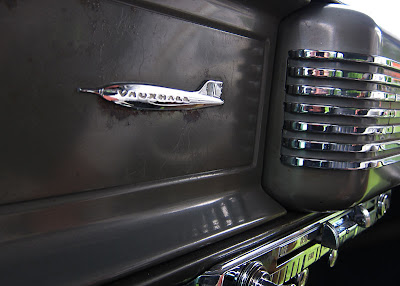 Vintage dashboard taken with a Kodak Retina II
Posted by stylemed at 2:00 AM