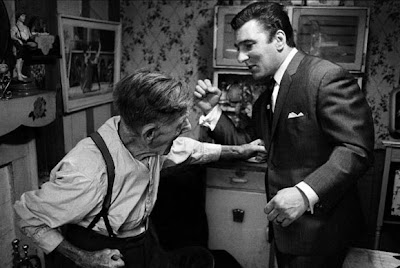 Reggie Kray and grandfather (1964) - Duffy
I'm sad to say that Brian Duffy has died.
Known simply as Duffy, he was one of three working class photographers who changed photography and art in the 1960's.

Duffy had a notoriously difficult personality and will be remembered for burning his negatives. Like Dennis Hopper who also died this week, I think this aspect of Duffy overshadowed his work which was a pity because he was a class act. Duffy had a beautiful mind, creative and erudite, we owe him a round of applause.