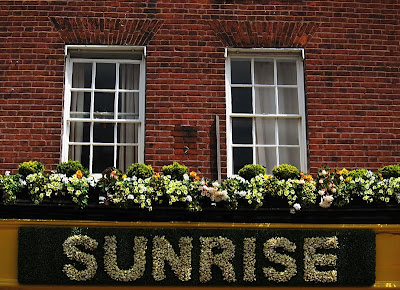 It's a new dawn, it's a new day
Before you ask, I'm feeling a wee bit better, but still very weak.
I had to drag myself off the sick bed yesterday to submit 2 pieces to be judged in an open exhibition at Bury St Edmunds art gallery.

I completed and returned the application back in February together with the entrance fee. The art was taken to the framers in March and collected a few weeks ago. The submissions are accepted over three days.

I had to drive 30 odd miles in beautiful countryside on a lovely morning, so naturally, I decided to stop for refreshments on the way. The cafe was new to me, but looked promising, it's called Tubby's. The name conjured up a cheerful rosy cheeked chef preparing good food.

When I entered the cafe it was mid morning, which in the UK is break time. Truckers, sales reps and everyone on the road take a break, mid morning. Cafe's are always busy around this time, but Tubby's was empty. Still I had high hopes as I ordered from the menu of "Famous All-Day Breakfasts". 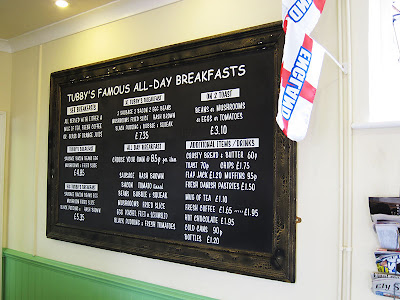 Tubby turned out to be a young couple, neither were tubby or cheerful. The first disapointment was the tea. It's very easy to make a cup of tea and the profit margin on a tea bag is huge but Tubby's tea was dreadful! Weak, tasteless and too hot. The tea was so hot and the cup so well insulated that it was still steaming dangerously after I left the cafe. It's probably still sitting there, steaming away. 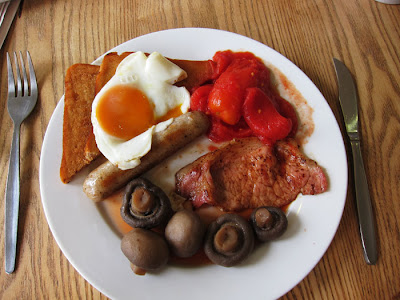 The breakfast itself was a miserable affair, look at it. Re-heated bacon, canned tomatoes and canned mushrooms. Those mushrooms were boiled and slimy.

I won't discuss the fried (greasy) bread or the suspiciously pale sausage, you've heard enough of this sorry story, but I would just like to say that if you can't make a cup of tea, and you have trouble cooking a breakfast for one paying customer, why would you open a cafe with a "Famous All Day Breakfast" menu?

Half an hour later I arrived in Bury St Edmunds, hungry and thirsty. First I went to the gallery to submit the work which was quick and painless. I noticed that there were hundreds of pieces of art (a lot of it looks impressive to me), already stacked against the walls and it was only 11.30am, and there are two more days to submit. On the way out of the gallery more entrants were arriving, and walking through the town I saw several hopefulls with large bundles of frames under their arms heading to the gallery. The competition is very stiff, I estimate over 1000 entries so I'll be extremely lucky to have one of my works selected.

Next year I'm entering a couple of pieces in the Royal Academy of Arts summer exhibition which receives over 11,000 entrants. Exhibitions are hard on artists, emotionally and financially. 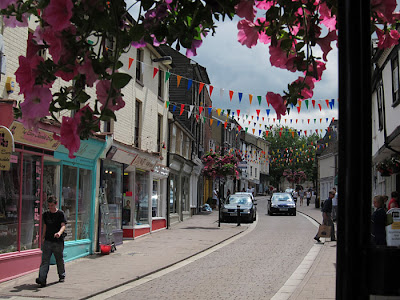 Bury St Edmunds
I finally crawled into a small cafe in Bury St Edmunds that wasn't pretentious. A nice little cafe in a street with interesting shops. I ordered a pot of tea and a caramel bun which lifted my spirits no end.
Posted by stylemed at 1:21 AM