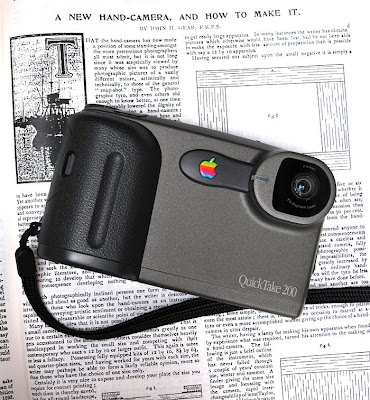 Apple Quicktake 200
The camera above is my first digital camera, an Apple Quicktake 200 that I bought in the spring of 1996. My reasons for wanting a digital camera in 1996 were only obvious to me. I worked as a designer and illustrator for a company that published small runs of technical manuals. All my work was done on a Macintosh computer that had 4 programs loaded, QuarkXpress, Microsoft Word, Adobe Illustrator and Photoshop.

Photoshop was launched in 1990 and it must have been a great leap of faith by Adobe because at the time there were no useable, color, digital cameras available. The program was used solely to drive and capture images from a scanner. Photoshop had fewer features than it does now but it was, even then, a complete digital darkroom. When Apple launched the Quicktake 100 in 1994 Photoshop at last had a reason to exist. 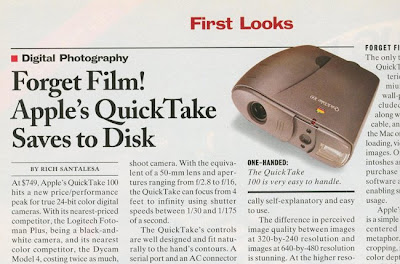 Review of the QuickTake 100

Between 1990 and 2002 and except for buying a house and a car, products made by Apple were my biggest expense in life and the cameras were no exception. I don't remember what that first digital camera cost, proabably £400-500, but I do remember applying for a bank loan, and waiting for the letter that said I'd been approved.

You can see from the review above that the first Apple camera (QuickTake 100) got some glowing reviews in the press ("Forget Film"), at the time and that got me lusting badly. The QuickTake 200 received even more praise to the extent it became a "Must Have" item. And so, as is my way, I had it.

I used the camera professionally within a day of buying it. I had a freelance job designing a brochure and web site for a car hire company. I believed the time and work saved by using the camera would allow me to complete the job quickly and increase my profit. Oh what a naive young fool I was.

You should never believe the hype, but I'm a sucker for it. Looking back I can see now that the reviewers didn't know anything about photography, they were writing nonsense that I believed. I mean how could they compare early digital cameras with film, you couldn't make prints from digital cameras, photo printers hadn't been invented! The only indication of quality was a small computer screen or the very small viewing screen on the back of the camera.

The camera I went into debt for was a bad joke but nobody ever said so. It was almost un-useable. Looking at the camera now - it takes 4 AA batteries and if you buy the best, most expensive ones you'll have enough power to make 8 exposures, but not enough power to review them all. Anything other than the the most expensive batteries and you'll be lucky to get 5 exposures.

You compose your photograph by holding the camera at arms length and peering into the 1" x1.5" high screen. You press the shutter then wait for an eternity while the screen goes blank.

The resolution is 640 x 480 pixels which makes a reasonable print, the size of my index finger nail. The image can be viewed on a small computer screen, say 10 inch but no bigger. Then there is the quality. At anything other than bright sunlight the images look like mud, but very colorful mud. My portraits of the staff at the car rental company were grotesque.

After one professional engagement the QuickTake made me eat humble pie. I made excuses for everything I used it for, then I re-photographed the whole job. What was worse was that I couldn't get rid of the thing, I didn't join Ebay until 2000. 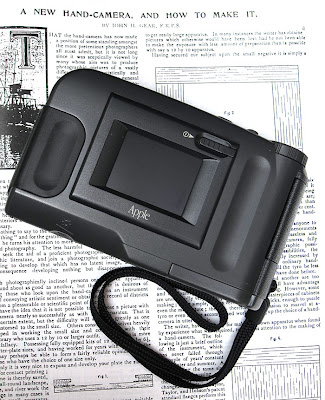 Other than the above, there's not a lot else to say about the Apple QuickTake 200 other than the fact that it is definately a modern camera, its genes have found their way into the latest digital cameras. What I find amazing is that 14 years after the Apple Quicktake, camera manufacturers are still striving to get it right.

My first digital camera didn't put me off the type, far from it, I'm still the first in line when a new, "groundbreaking" product hits the streets but I'm still devoted to film.

My Apple Quicktake remains the least used one of the most expensive cameras I've owned. It sits, in mint condition, at the back of my sock draw as a reminder not to take out loans for the sake of your art.

Sometimes, when I'm lying in bed, just before falling asleep, I can hear a noise from the sock draw. It's the camera laughing at me.
Posted by stylemed at 1:03 AM